A type of paid online advertising that aims not to distract the visitor’s experience.

In today's world of information overload, it is difficult to get attention. The human brain even lacks the capacity to absorb the thousands of advertising messages it is exposed to every day. That’s why there’s an increasing phenomenon called banner blindness – people tend to ignore online ads and mostly want intriguing content. This is precisely what native advertising can offer. 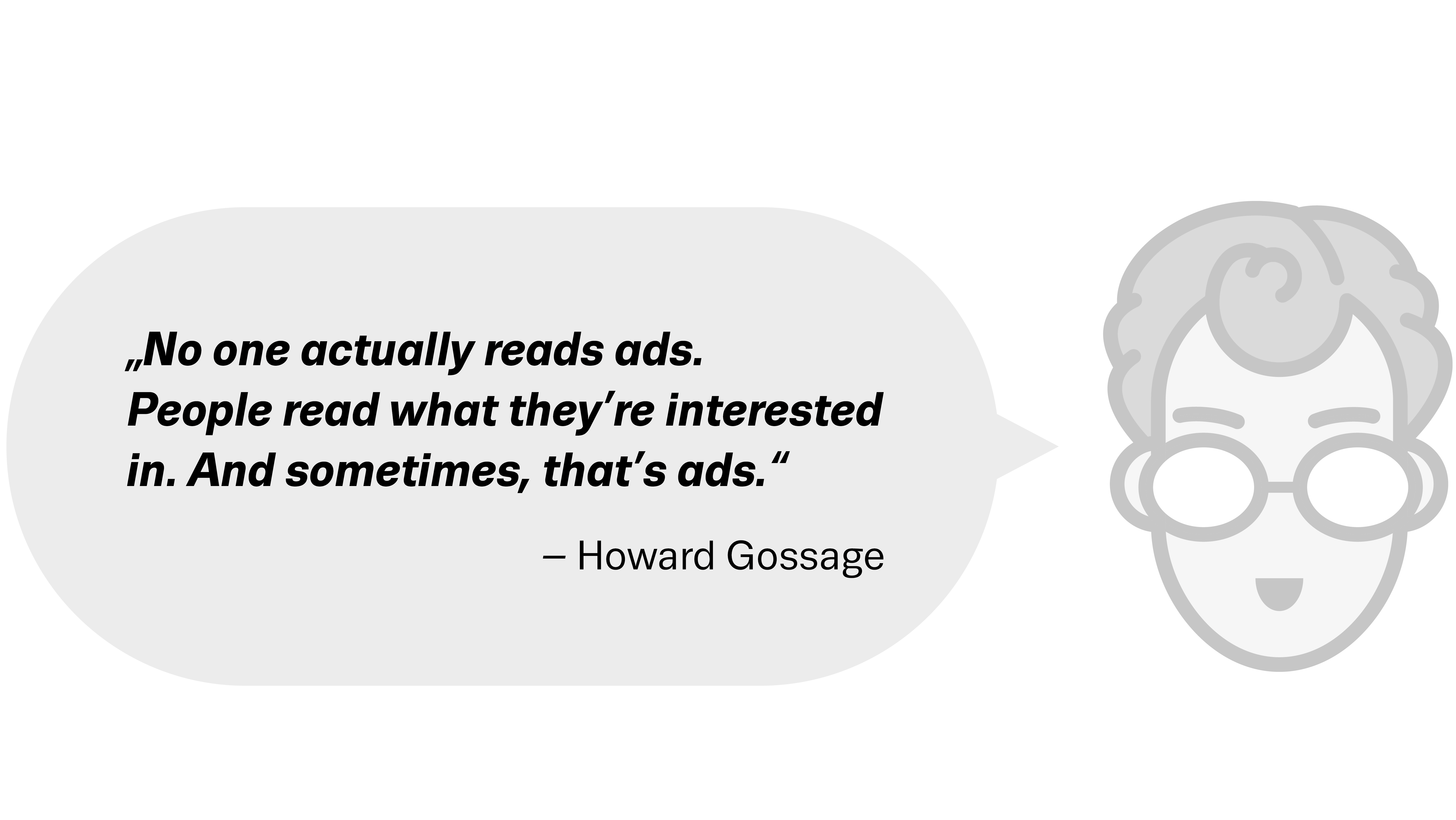 As a result, the use and presence of the format have been growing steadily. It’s enough to have a look at the social networks where it is riding high in popularity. The clickthrough rate of native ads in Facebook’s News Feed is 44 times higher than from the traditional placement on the right, and the conversion rate is five times better. It is also a format that is beneficial to all three parties involved, and hence sustainable in the long run:

Why Use Native Advertising?

Some interesting statistics about mobile advertising 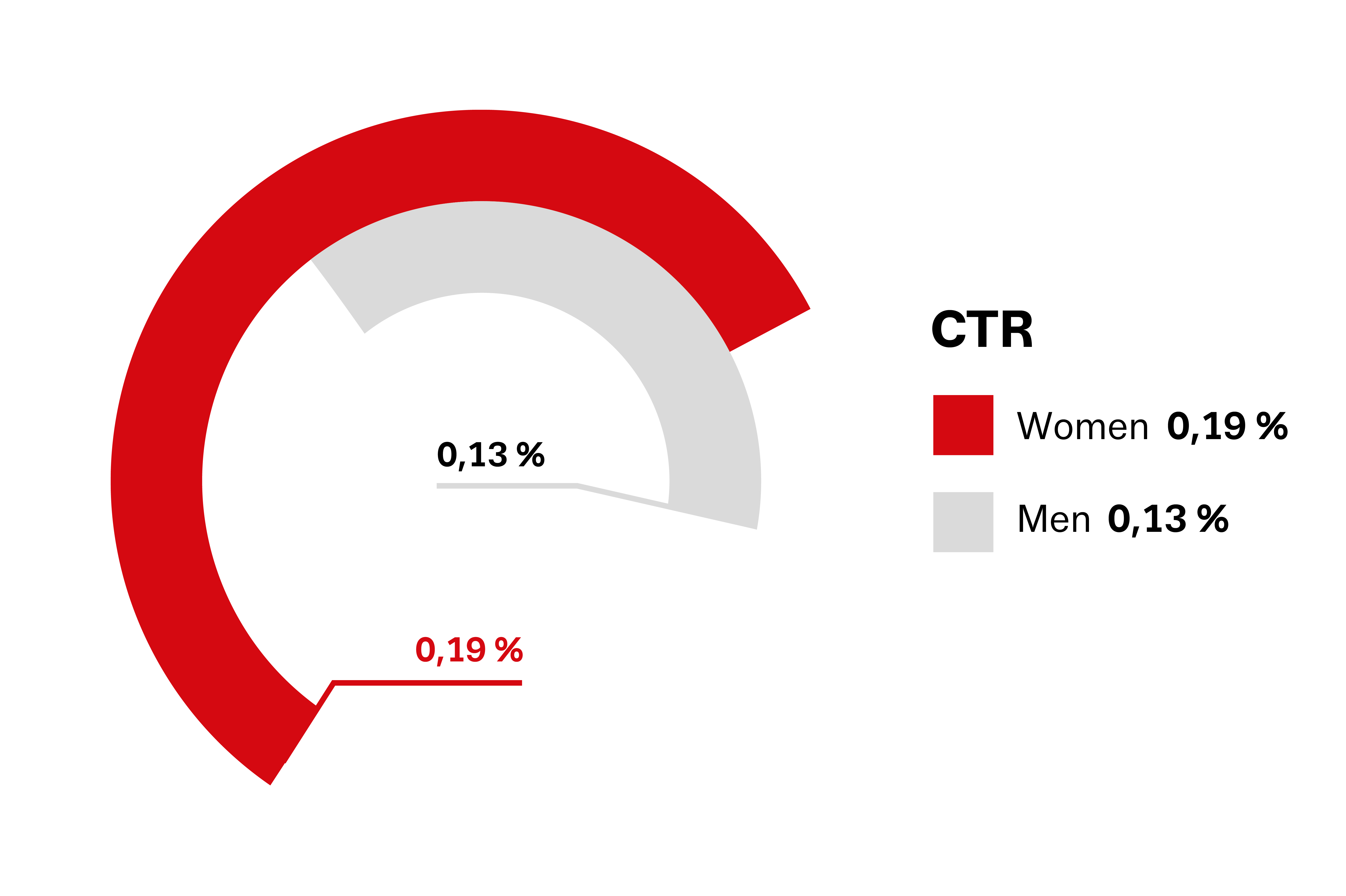 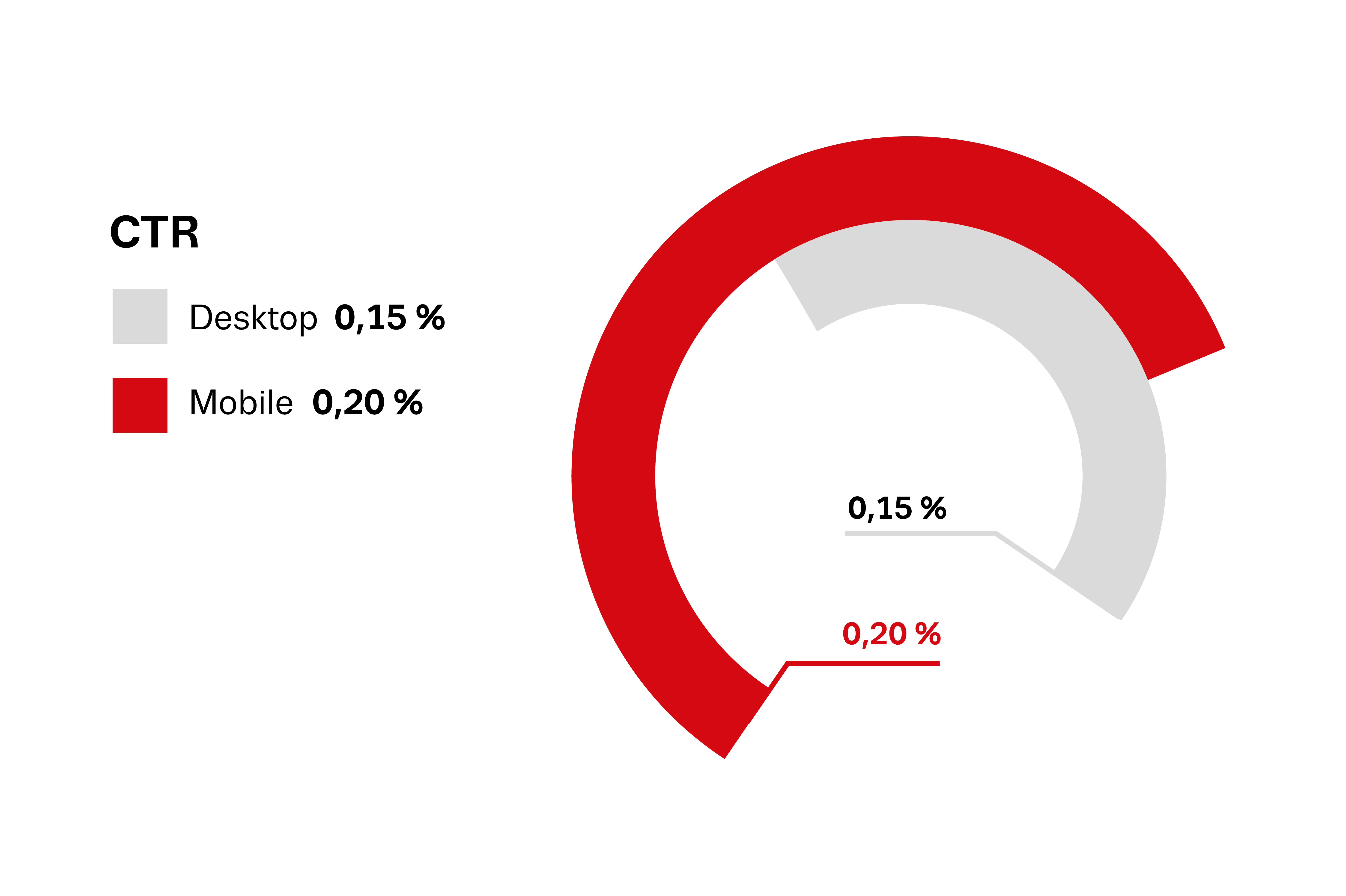 Native advertising is not a traditional banner

As a traditional banner

As can be seen through examples from the financial sector, the clickthrough rate of native advertising differs significantly across campaigns and even within industries. Although Bank X (name changed) chose a clean and effective creative message that perfectly captures what the corporate brand is about, its CTR was not as high as when Akcenta (a large Czech foreign exchange company) provided answers to user questions concerning the end of the Czech central bank’s intervention mode.

This is because a native ad requires a different approach from a banner, given its placement in an environment where readers expect content. Consequently, with native advertising, readers need to be attracted by intriguing content.

What does a native ad on Seznam.cz look like? 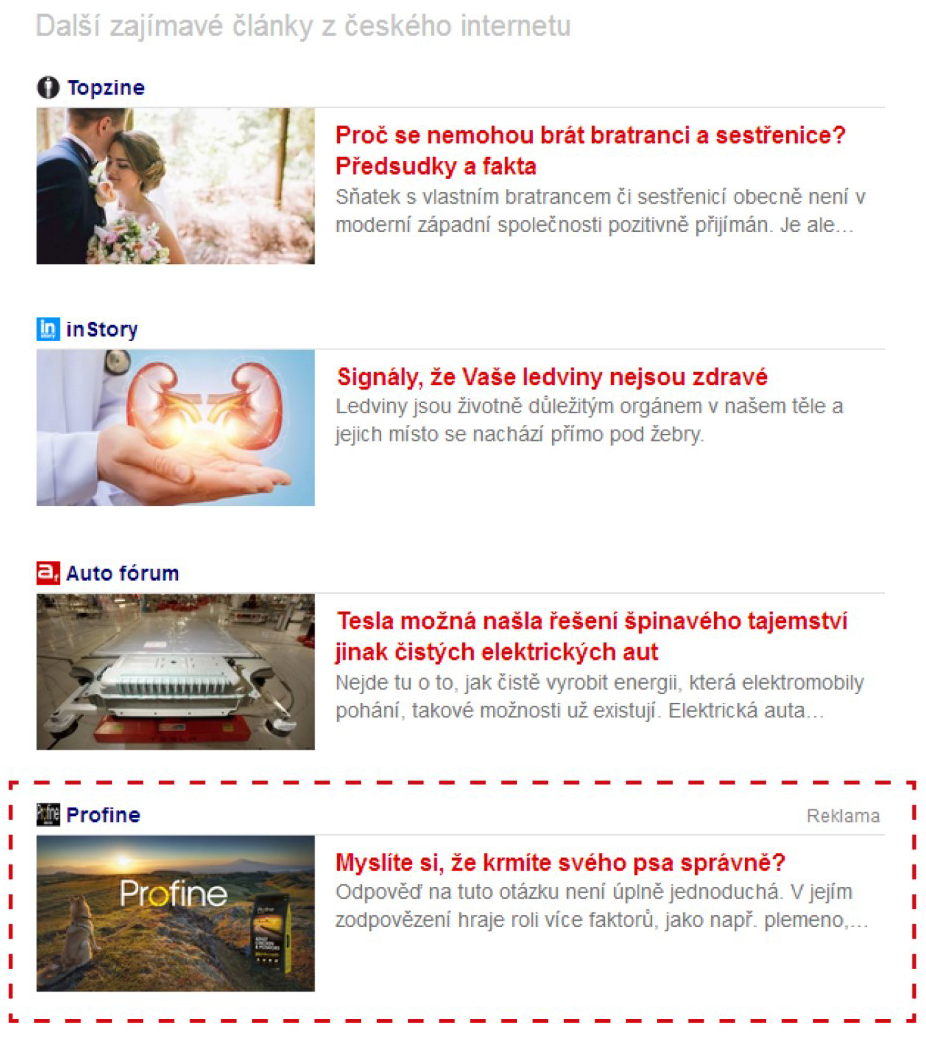 Another type of native advertising is PR articles that can be published on the Novinky.cz, Proženy.cz, Sport.cz and Super.cz pages. Article snippets are visible for a few days, but their URLs remain available even afterwards. To maximize performance, we recommend supporting these articles with native adverts. 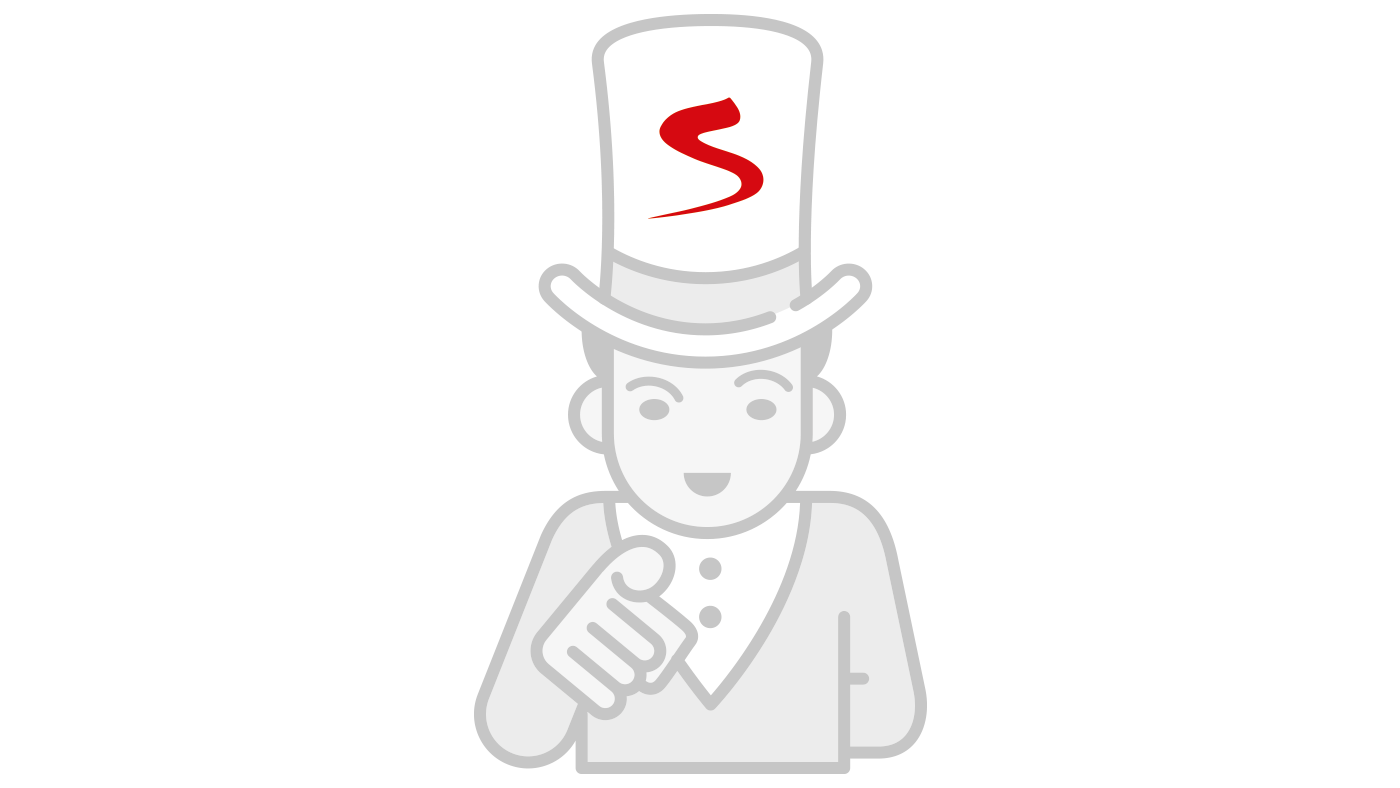 We will be adding native advertising across other Seznam.cz services as well. We will also continue working with our clients towards offering formats that appeal to site visitors.

If you’re not using native advertising as yet, allow yourself to be inspired by our clients' examples and join the many successful advertisers who are already benefiting from all the advantages of native positions.

Native advertising as part of the STDC model

It can best be used in the first two stages of the buying process: 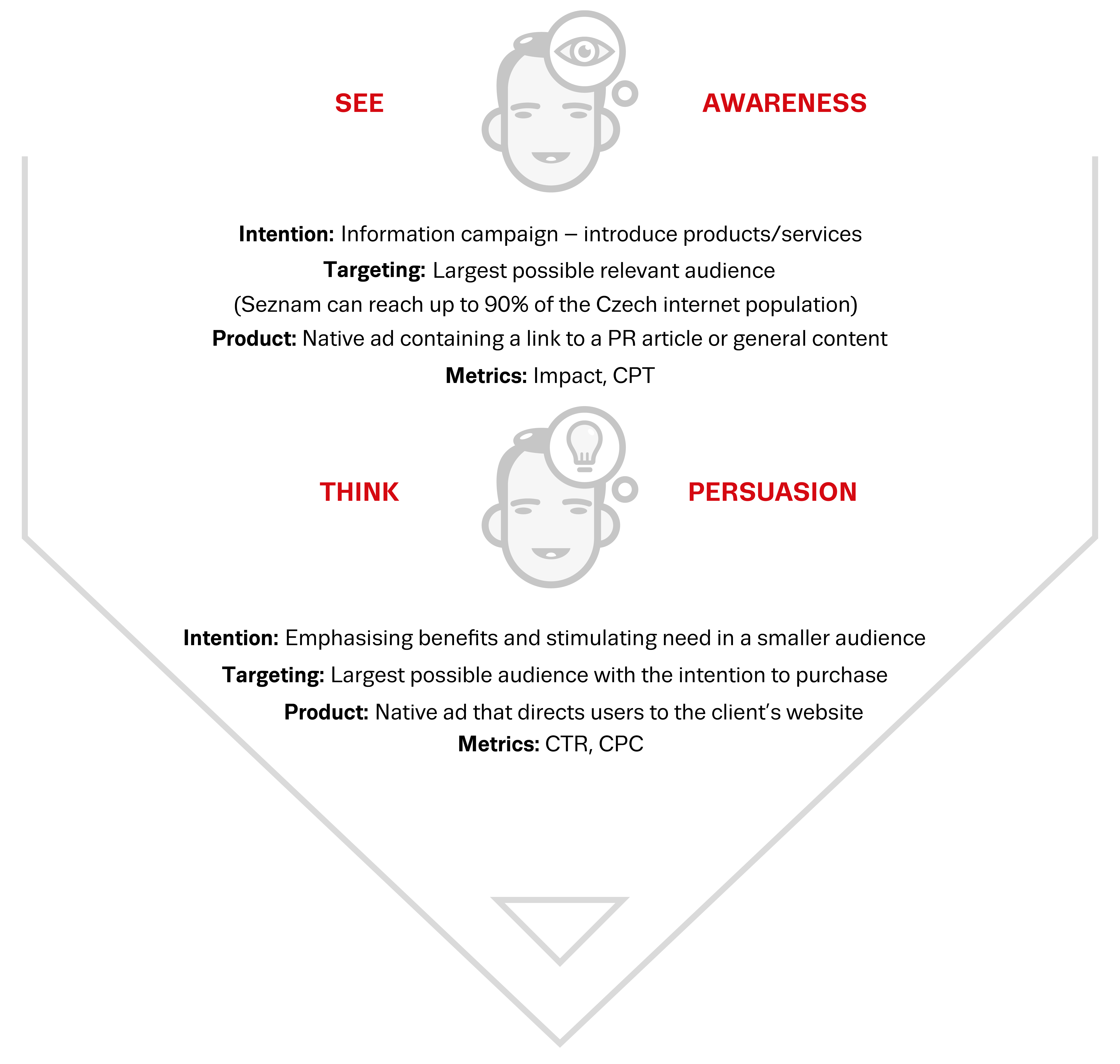 Examples from Our Clients

The client wanted to increase the readability of their PR article on the Proženy.cz site, where they were promoting one of their products for an entire week.

Native advertising increased its readability by 31 %. Of all the advertising formats in support of the PR article, it had the highest CTR and the lowest CPC.

Another positive result of the campaign was an increase in the search rate for Eucerin AtopiControl, which the article promoted, by as much as 717 %.

The client wanted to increase the readability of their PR article on the Novinky.cz, site in which they compared the quality of fifteen breakfast muesli cereals on the Czech market.

Native advertising increased its readability by as much as 314 %, at a very low cost per click.

No one had entered the product in a search engine before the launch of the campaign, which changed immediately after the campaign started.

The client was looking for ways to bring new potential customers to their site and present their services to them. The result was a native ad on the home page of Seznam.cz, which was promoted with information on the termination of the Czech National Bank’s intervention mode and linked to the client's website.

Of all the advertising formats, native advertising had the highest CTR and the lowest cost per click. Even when the same actual message was used, the native ad scored a clickthrough rate that was six times higher than banner adverts.

The client wanted to attract new potential customers to their website, where they were presented with various juicers and shown a comparison of them. Those who showed interest were approached again using retargeting.

Native ads proved to be the most cost-effective format thanks to their low cost per click. The site was visited by around 3,000 people, of whom 91% were newcomers.

How to Work Effectively with Native Advertising

This will draw attention to a native advert: 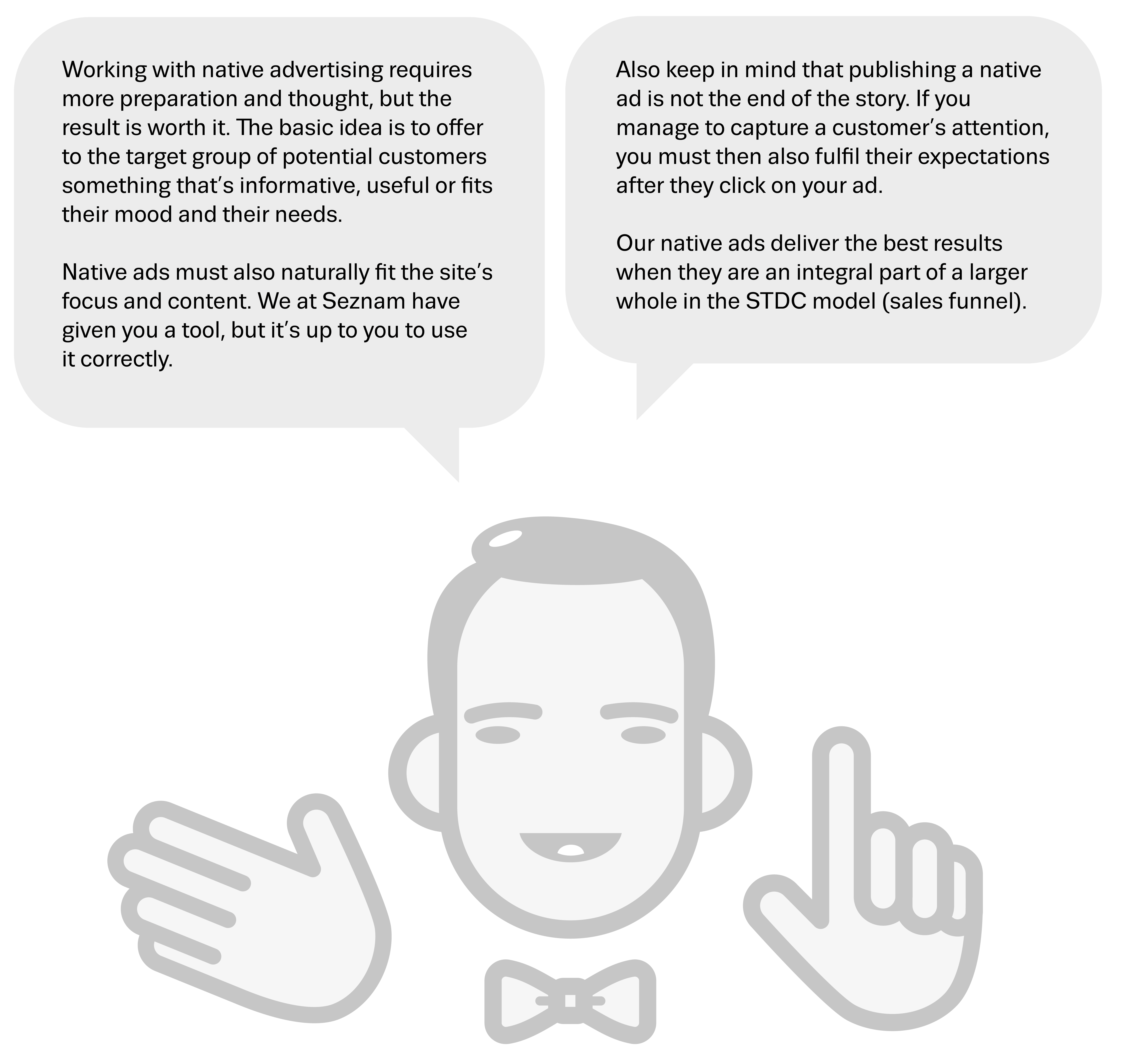